September 1, 2021 - We are proud to announce that Bart M. Schwartz and Thomas A. McShane have been recognized as Trailblazers by the National Law Journal.

Bart has been named a Crisis Leadership Trailblazer for his service as monitor to government institutions such as the New York City Housing Authority and large private corporations like General Motors.

Tom has been named a Real Estate/Construction Law Trailblazer for his role overseeing integrity monitoring for enormous public works projects, where corruption could be especially dangerous to the public

Thank you Bart and Tom for setting the bar high and leading the way! 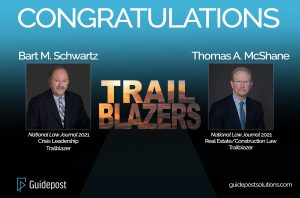